Two years ago, on this same date, we inaugurated the Guillermo Indio Fidalgo Marine Fauna Rescue Station (ERFAM), on the site of Lanchas del Sur S.A., on site 11 in Puerto Galván, Bahía Blanca. This space is named after our remembered friend, park ranger, journalist and environmentalist the "Indio" Fidalgo, in recognition of his tireless work and commitment to the conservation of the sea and its inhabitants. After two years of work, and reviewing our major achievements, I can say that we have honored his legacy.

More than 300 individuals of different species, many of them threatened with extinction, such as the Green Turtle, the Giant Petrel of the South, the Southern Flamenco, the Magellan penguin, among others, have received attention in our facilities. We have organized different training courses related to local conservation issues, talks aimed at our community, visits for schoolchildren and kindergartens, outreach actions through participation in different radio, television and graphic media, thematic navigations for university students, etc. In addition, our staff has participated in specialized training in different national and international fields. We have strengthened our strategic ties and alliances with other institutions, especially with the Museum of Natural Sciences "Vicente Di Martino" in Monte Hermoso and the Mundo Marino Foundation, in San Clemente del Tuyú.

Today we are proud to be part of the few rescue centers that officially make up the OPDS "Marine Wildlife Rescue Network". Also, we have formally reported cases of abuse against marine wildlife and housed in our facilities forfeitures resulting from federal justice operations in wildlife trafficking cases.

If we talk about wildlife rehabilitation, much has been written, but much more we have had to learn in these two years. Thus, our station is a generator of new knowledge that have served to improve our future action by promoting, in addition, cooperation with other working groups of Argentina through the exchange of this information.

We have great challenges ahead of us and the implementation of new projects that will seek to improve the approach to some of the local conservation problems; the interaction of Franciscan dolphins and sea turtles with local fisheries and marine pollution, the promotion of fishing and the release of rays, the construction of plastic traps, among others. In short, we will also be formalizing our Environmental Education Program for local communities linked to the White Bay Estuary.

I don't want to stop thanking Alberto Bozzetti of the company Lanchas del Sur S.A. and all its members, the Consortium of Management of the Port of Bahía Blanca especially Alberto Carnevali, the Fidalgo Family, the members of the Argentine Naval Prefecture and Volunteer Firefighters, Guardians of the Estuary, Provincial and Municipal Rangers, craft fishermen of the entire estuary, local and national journalists, and our voluntari@s for their commitment and hard work. To all those person@s who have permanently supported our action and so many otr@s that have helped us to continue to grow.

The rescue station is officially part of the Marine Wildlife Rescue Network of the Province of Buenos Aires. 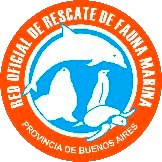